Winner of the 13th Henryk Wieniawski International Violin Competition in Poznań, acclaimed by audiences around the world.

In 2006, Szymczewska received First Prize, the Gold Medal and an Award from the Audience of TVP Kultura at the 13th Henryk Wieniawski International Violin Competition in Poznań. She was also the winner of the 2009 London Music Masters.

Her debut at Wigmore Hall in October 2009 brought her an invitation to perform at the Royal Festival Hall with the London Philharmonic Orchestra, conducted by Osmo Vänskä, in autumn 2010. Following that spectacular success, The Times wrote about her, “She plays with a poise, authority and musical intelligence beyond her years, sounding at times like a fiery young Ida Haendel.”

In 2005, on the invitation of Maestro Sejii Ozawa, Szymczewska became the concertmaster of his orchestra on a tour of Japan and China. She is a regular participant in the prestigious Summer Music Academy in Switzerland, founded by Maestro Ozawa, where she has worked under the tutelage of such outstanding artists as Pamela Frank, Nobuko Imai, Sadao Harada, and Robert Mann. In February 2009, together with Krystian Zimerman, Kaja Danczowska, Ryszard Groblewski and Rafał Kwiatkowski, she performed Grażyna Bacewicz’s pano qintets to commemorate the centenary of the composer’s birth. The tour culminated with the recording of an album on the Deutsche Grammophon label. In 2010, Szymczewska appeared in chamber concerts with Gidon Kremer and Franz Helmerson at the Chamber Music Connects the World Festival in Kronberg.

During a special night concert of the 7th Chopin and His Europe Music Festival in Warsaw, she performed Zarębski’s Piano Quintet with Martha Argerich, which was recorded and released on a DVD.

She also appeared in Warsaw with Yuri Bashmet and the Moscow Soloists, performing Mozart’s Sinfonia Concertante during the orchestra’s world tour on the occasion of its 20th anniversary. She had the pleasure to play with Anne-Sophie Mutter and the Mutter Virtuosi during the gala concert opening the Krzysztof Penderecki European Centre for Music, and also on a tour of Asia, Canada and the USA, where she debuted at Carnegie Hall.

The artist performed violin concertos by Polish composers in Turkey, Chile and Switzerland, during the inauguration of the Koszalin Philharmonic’s new building, the Krzysztof Penderecki Festival in Warsaw, and the Olympic Winter Games in Sochi.

In September 2016 Szymczewska’s latest album with sonatas by young Polish composers was premiered. The artist is accompanied by the pianists Grzegorz Skrobiński and Marek Bracha, the guitarist Łukasz Kuropaczewski and the accordionist Maciej Frąckiewicz.

Agata Szymczewska is the recipient of scholarships from the National Children’s Fund, the Prim Minister, Yehudi Menuhin’s Foundation Live Music Now, Gundlach Musikpreis in Hanover and the Ministry of Culture, as part of the Young Poland programme. Additionally, she has been honoured with the Passport Award of Polityka weekly, the Transatlantyk Chopin Award 2011, the TVP Kultura Award (in the category of classical music) and four Fryderyk Awards. 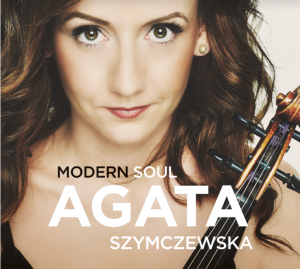 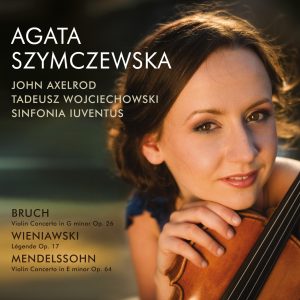