Bass Wojtek Gierlach has appeared in many leading operatic roles and his records have been acclaimed by music lovers all over the world. 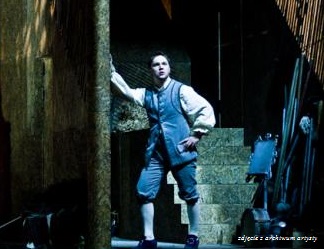 Born in Tarnawa Górna, he studied at the Warsaw Chopin Music Academy with Professor K. Pustelak, where he graduated with distinction.

Gierlach made his debut in 1999 at Warsaw Chamber Opera singing Haendel’s Imeneo title role; in this theatre he also performed the role of Don Giovanni. At the Teatr Wielki – Polish National Opera he appeared as Colline in La Bohème, Raimondo in Lucia di Lammermoor, Alfonso in Lucrezia Borgia, Escamillo in Carmen, and Gessler in Guillaume Tell. Some of his other remarkable performances in Poland include Méphistophélès in Berlioz’s The Damnation of Faust at the Cracow Philharmonic and King Louis in Weber’s Euryanthe at the Ludwig van Beethoven Easter Festival.

Abroad, he performed Figaro in Le Nozze di Figaro at Teatro Piccini di Bari and Argenio in Imeneo at Opera Ireland in Dublin. In Rossini’s operas he played Mustafa in L’Italiana in Algeri and in operas in Lisbon, Minneapolis and Ravenna; Assur in Semiramide at Teatro Verdi di Pisa, Alidoro in La Cenerentola at Festival d’Aix-en-Provence and at the Stadttheater in Klagenfurt, Orbazzano in Tancredi at Teatro Maestranza de Sevilla, Don Basilio in Il Barbiere di Siviglia at Deutsche Oper Berlin, the Governor in Le Comte Ory at Wildbad’s Belcanto Opera Festival, and Lord Sidney and Don Profondo in Il Viaggio a Reims at Rossini Festival in Pesaro. He also sang Timur in Turandot (Santa Cruz de Tenerife) and Commendatore in the premiere and recording of Ramón Carnicer’s Il dissoluto punito at La Coruña Mozart Festival. Some  of his other major roles include Salieri in Rimsky-Korsakov’s Mozart and Salieri at the Teatro Filarmónica de Oviedo, Orfeo at Narodne Divadlo Bratislava, Conte Rodolfo in Bellini’s Sonnambula and Creonte in Mayr’s Medea in Corinto in St. Gallen, and Méphistophélès in Berlioz’s The Damnation of Faust.

His appearances have included Bach’s Mass in B minor, conducted by Helmuth Rilling  at the Warsaw Philharmonic, and Verdi’s Requiem, conducted by Kai Baumann at the Polish Baltic Philharmonic. He performed the solo part in Olivier Greif’s Symphony in a concert inaugurating Marc Minkowski’s artistic directorship of Sinfonia Varsovia. He sang in Salieri’s The Passion of Jesus Christ with I Solisti Veneti conducted by Claudio Scimone (the concert was broadcast by RAI Italian Television), Rossini’s Stabat Mater with Orquesta Sinfónica del Principado de Asturias under Alberto Zedda and with ORquesta de Navarra under Antoni Wit, Beethoven’s Symphony No. 9 with Polish National Radio Symphony Orchestra, Penderecki’s Seven Gates of Jerusalem under the composer’s baton, and Arvo Pärt’s St John’s Passion in Prague’s Spring Festival.

Wojtek Gierlach has recorded Mirteo in Meyerbeer’s Semiramide under Richard Bonynge, Zambri in Ciro in Babilonia, Pharaoh in Mosè in Egitto, and Douglas in La Donna del Lago by Rossini under Alberto Zedda, Dourlinski in Cherubini’s Lodoïsca and Domoslav in Spohr’s Der Berggeist (album released in collaboration with the Ludwig van Beethoven Association), and Voivode in Statkowski’s Maria conducted by Łukasz Borowicz.

Wojtek Gierlach is represented by the Ludwig van Beethoven Association