When he was only 18 years old, he founded the State Youth Orchestra of Armenia, which consists of young talented students of the Yerevan Komitas State Conservatory, and became the Orchestra’s Artistic Director and Music Director 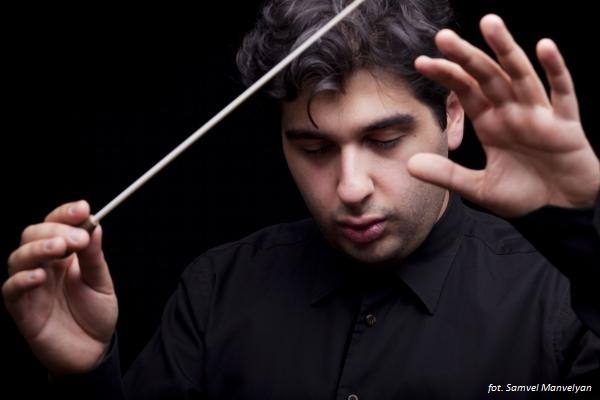 Armenian conductor Sergey Smbatyan was born in 1987 in Yerevan. He started to learn the violin at the age of four, and refined his talent by taking lessons from Bagrat Vardanyan and Zakar Bron. After his interests turned to conducting, he pursued his studies at the Komitas State Conservatory (where his teacher was Yuri Davtyan) and at the Tchaikovsky Conservatory in Moscow, graduating from both in 2009. The same year he received his PhD in Fine Arts from the Institute of Arts of the National Academy of Sciences of Armenia. In 2011, he was selected to take part in the London Symphony Orchestra’s public master classes as part of the “LSO Discovery” programme for young conducting talents. This led to his collaboration with the LSO under Valery Gergiev and Sir Colin Davis. He also took conducting lessons from Riccardo Muti. In May 2012, he graduated from London’s Royal Academy.

He began his violin career at the age of thirteen when he won international violin competitions in Japan, Romania and Italy. As a soloist, Sergey Smbatyan has performed with the Israel Philharmonic Orchestra and the Moscow Academic State Symphony Orchestra among other ensembles.

In 2005, when he was only 18 years old, Sergey Smbatyan founded the State Youth Orchestra of Armenia, which consists of young talented students of the Yerevan Komitas State Conservatory, and became the Orchestra’s Artistic Director and Music Director. A year later, SYOA was named the official orchestra of the Aram Khachaturian International Competition and in 2008 the President of the Republic of Armenia granted the Orchestra the prestigious status of a “State Orchestra” for their high professionalism and deep understanding of contemporary music.

Under Smbatyan’s leadership, SYOA received invitations to renowned festivals such as Young Euro Classics and the Moscow Easter Festival, and performed at major venues including the Konzerthaus in Berlin, Opera Garnier in Paris, Palais des Beaux-Arts in Brussels and the Tchaikovsky Concert Hall in Moscow. The orchestra performs regularly, giving 35-40 concerts each season. It has collaborated with Vladimir Spivakov, Vadim Repin, Krzysztof Penderecki, Maxim Vengerov, Boris Berezovsky, Mikhail Simonyan and Denis Matsuev among others.

Smbatyan made his London conducting debut with the Philharmonia Orchestra in spring 2010 as part of HRH Prince Charles’ charity concert at the Windsor Castle. He conducted the orchestra again in 2011. Highlights of his 2012/2013 season are performances with the Dresdner Philharmonie in the Frauenkirche Dresden and at the Dvořák Prague Festival with the Prague Radio Symphony Orchestra. In May 2014 he conducted the Mariinsky Theatre Orchestra at the opening of the 19th International Musical Olympus Festival in Saint Petersburg. Highlights of his 2014/2015 season include concerts with the Deutsches Symphonie-Orchester Berlin, the Polish National Radio Symphony Orchestra in Katowice, and the Korean Chamber Orchestra.

Sergey Smbatyan is a co-founder of the Armenian Composing Arts Festival. He also seeks active participation in charity projects, conducting at nursing homes, orphanages and universities throughout Armenia. In 2009 he founded the UNICEF Children Orchestra which gave numerous performances in Armenia and in Europe.

Sergey Smbatyan is represented by the Ludwig van Beethoven Association