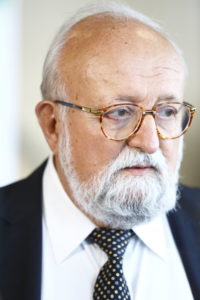 Born on 23 November 1933 in Dębica, he studied composition first with Franciszek Skołyszewski, and later with Artur Malawski and Stanislaw Wiechowicz at the Academy of Music in Kraków. His art has garnered the composer numerous Polish and foreign awards, including 1st, 2nd and 3rd prizes at the 2nd National Young Composers Competition (1959), Polish National Award, First Class (1968, 1983), the Prize of the Polish Composers’ Union (1970), Herder Prize (1977), Prix Arthur Honegger (1978), Sibelius Gold Medal (1983), Premio Lorenzo Magnifico (1985), Wolf Prize from the Israel Wolf Foundation (1987), Grammy Awards (1998, 1999, 2001), Grawemeyer Music Award (1992), the Prize of the UNESCO International Tribune of Composers in Paris (1993), the Best Living World Composer award (MIDEM, 2000), and the Prince of Asturias Award (2001).

He conducts concerts with leading symphony orchestras in the United States and Europe. Besides his own compositions, Penderecki conducts symphonic works written in various periods.

As a composer, he has written over 100 pieces, including chamber, solo, instrumental and orchestral music, symphonies, concerts for a variety of instruments, songs and choir pieces, operas, cantatas, and oratorios. He has also composed the music for over 100 feature and documentary films, and theatre performances for adults and children.

Penderecki’s most recent compositions include Dies illa for soprano, mezzosoprano, bass, mixed choirs, and orchestra – the piece was commissioned to commemorate the Centenary of the Outbreak of the First World War, and had its world premiere on 9 November 2014 in Brussels; Concerto for Trumpet dedicated to Gábor Boldoczki, with the world premiere at the Saarbrücken Festival; and the Polonaise for orchestra written on the commission of the Fryderyk Chopin Institute in Warsaw for the inauguration of the 17th International Chopin Piano Competition in Warsaw on 1 October 2015.