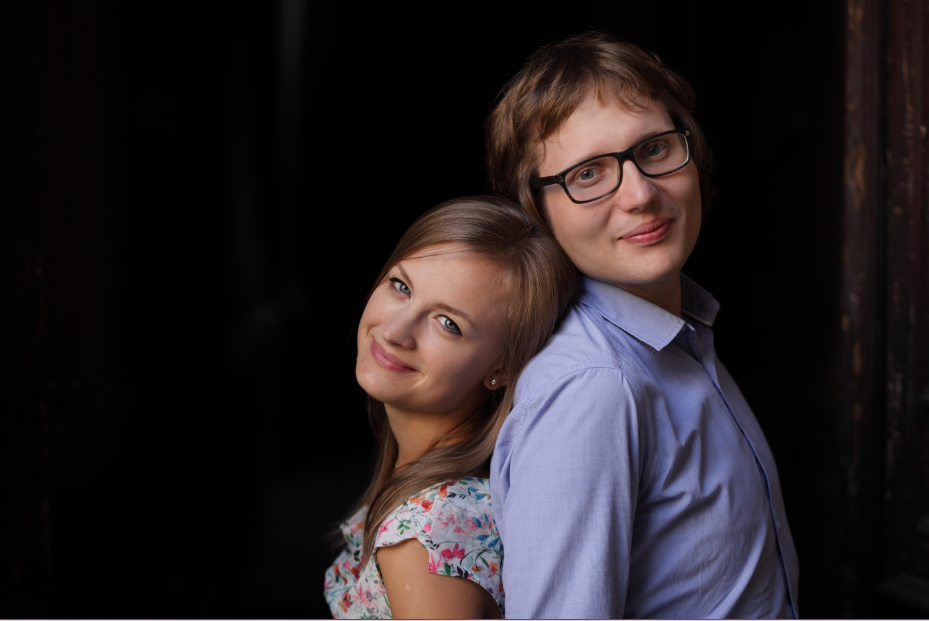 Agnieszka Zahaczewska-Książek and Krzysztof Książek established their duo in 2012 working under tutelage of Professor Sławomir Cierpik at the Academy of Music in Kraków. Since then they also were guided by Professor Maria Szwajger-Kułakowska and Professor Arie Vardi. They were performing concerts in Poland and abroad (Switzerland, France, Thailand, UK, South Africa). In 2019 they won 2nd prize and special prize for best interpretation of Franz Schubert work at 21st International Schubert Competition for Piano Duos in Jesenik (Czech Republic). They were also finalists and got a special prize at 3rd Suzana Szörenyi International Duo Competition 2019 in Bucharest (Romania). In 2020 they received ‘Młoda Polska’ scholarship. In 2021 they won the 2nd Stanisław Moniuszko International Competition of Polish Music in the Chamber Ensembles category. The Ksiazek Piano Duo is represented by the Ludwig van Beethoven Association.

started to learn piano playing at the age of seven. She was a student of the State Music School in Nowy Sącz, finishing it with distinction. Her teachers were Danuta Jarząbek and since 2007 Professor Stefan Wojtas. In 2015 she finished with distinction studies at the Academy of Music in Kraków in the class of Prof. Stefan Wojtas. From 2015 to 2017 Agnieszka completed postgraduate studies in Professor Wojciech Świtała’s class at the Karol Szymanowski Academy of Music in Katowice. Currently she is a doctoral student at the above mentioned school in Katowice in the piano chamber music class of Professor Maria Szwajger-Kułakowska. During her studies in Kraków she was developing her skills in chamber music under the direction of Professor Kaja Danczowska, Professor Justyna Danczowska and Professor Sławomir Cierpik. Since 2018 Agnieszka is also member of Trio Legend (together with Monika Krasicka-Gajownik and Krzysztof Katana). The ensemble received 2nd Prize at VIII International Johannes Brahms Chamber Music Competition in Gdańsk (2018) and 1st Prize at XXVI International Johannes Brahms Competition in Pörtschach (2019). They took part in masterclasses led by Guarneri Trio Prague in Wengen (Switzerland) and Schlitz (Germany). They also worked under the tutelage of Stephan Goerner, Ulrich Koella, Ida Bieler, Maria Szwajger-Kułakowska, Wiesław Kwaśny. Trio Legend is currently studying at Kunstuniversität in Graz in Professor Chia Chou’s class. Agnieszka Zahaczewska-Książek is also the laureate of youth piano competitions (National Władysław Kędra Chopin Competition in Łódź, Juliusz Zarębski International Competition in Łomianki, National Festival “Young’s Chopin Interpretations” in Konin-Żychlin). She gave recitals as a part of concerts organized by the Fryderyk Chopin Institute at the Chopin Museum’s branches in Warsaw and Żelazowa Wola. Many times she took part in masterclasses, working under such professors as Tamás Ungár, Katarzyna Popowa-Zydroń, Józef Stompel, Andrzej Tatarski, Jerzy Sterczyński and others. She was also a holder of Krynica-Zdrój Mayor’s scholarship, Almanach of Muszyna Scholarship Fund as well as the one of the Rectors of the Academies of Music in Kraków and Katowice. She is currently working as accompanist at Violin and Viola Faculty at the Academy of Music in Kraków.

Krzysztof Książek about the artist