„One reason I admire the playing of Aleksandra Świgut  is its spontaneity. She often surprises me and makes unpredictable but creative interpretative gestures in her rather theatrical approach to the music” 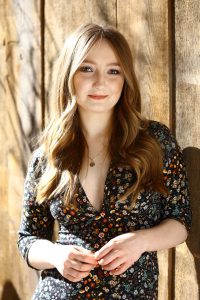 Aleksandra Świgut, pianist, a graduate and teacher of the Fryderyk Chopin University of Music in Warsaw, a prize-winner of the 1st International Chopin Competition on Period Instruments in Warsaw (2018).

During the season 2020/2021 she will perform with the Orchestra of the Eighteenth Century  in Concertgebouw, Sinfonia Varsovia in Grand Theatre National Opera in Warsaw, National Philharmonic Orchestra as well as solo recitals in London, Amsterdam, Sydney and Milan (LaVerdi). She performed at Chopin and his Europe Festival in 2019. Her performance of Ludwig van Beethoven’s Third Piano Concerto with Polish National Philharmonic Orchestra is planned for autumn 2020 in frame of Ludwig van Beethoven Festival.

Her wide experience with historical and modern instruments and different performance practices makes her interpretations unique. She studied with Piotr Paleczny at the Fryderyk Chopin University of Music in Warsaw, Wojciech Świtała and Maria Szwajger-Kułakowska at Katowice Music Academy and David Dolan at the Guildhall School of Music in London. She holds a doctorate from Gdańsk Music Academy, where she studied with Waldemar Wojtal.She has won many prizes in piano competitions, including in Ettlingen, Enschede and New Orleans and at the Polish Chopin Competition in Warsaw. She has appeared at festivals in Nohant, Paris and Duszniki-Zdrój, as well as the Beethoven Easter Festival and ‘Chopin and his Europe’. She has participated in masterclass courses, including at Hamamatsu, La Châtre, Royaumount Abbey (on a Royaumount Foundation scholarship), Leipzig, Radziejowice, Duszniki-Zdrój and Warsaw. She has worked with such outstanding musicians and teachers as Robert Levin, Malcolm Bilson, Arie Vardi, Anna Malikova, Soo-Jung Shin, Alexei Lubimov, Tobias Koch, Andreas Staier, Katarzyna Popowa-Zydroń, Ives Henry, Krzysztof Jabłoński and Mariola Cieniawa. As a soloist, she has performed with the Aukso Orchestra, the philharmonic orchestras of Łódź, Lublin, Zielona Góra and Podlasie, the Orchestra of the Eighteenth Century, Liepāja Symphony Orchestra and Netherlands Symphony Orchestra. She also performs as a chamber musician. Together with cellist Marcin Zdunik, she has recorded a disc of works by Robert Schumann, released by the Fryderyk Chopin Institute in the ‘Debuts: Young Talents’ series (2014). She also performs in duo with her sister, violinist Agnieszka Świgut. She is a former grant-holder of the Polish National Children’s Fund (2003–2010), which currently supports her pedagogic work. She has received multiple grants from the Polish Ministry of Culture, the Franciszek Wybrańczyk Foundation and the German Jutting Foundation